Death by Run Away Team of Horses

The Death of Winfield Scott Bauer

Mr. Bauer was working on his farm when a team of horses became frightened and ran away. In his attempt to hold them, he grasped the wheel of the wagon. The horses did not slacken their speed and as the wheel revolved it carried the unfortunate man with it.
He was thrown to the ground with considerable force, falling on his head and shoulders. Mr. Bauer was still conscious when members of the family came to his aid, but shortly after the arrival of the physician he lost consciousness.  He died Tuesday noon.

The deceased was born in Pennsylvania and was 44 years of age. He has made his home in the county for some years. At one time he was in charge of the municipal light plant before it was taken over by the city.

He was survived by his widow and ten children.
(My mother Catherine Mae Binder was one of those 10 children but not the daughter of Mr. Bauer.)

Funeral services will  be  held in Ree Heights Friday at 10:00.
Mr. Bauer was the husband of my grandmother Anna Marie Binder Bauer husband and son of Irvin Bauer.
They lived in Hand County, Ree Heights, South Dakota. 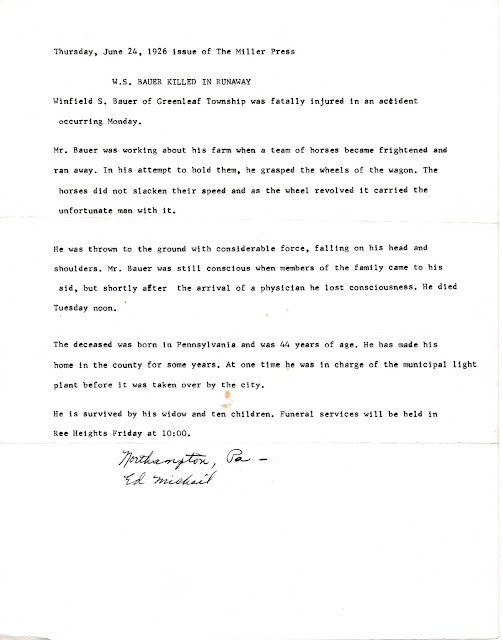 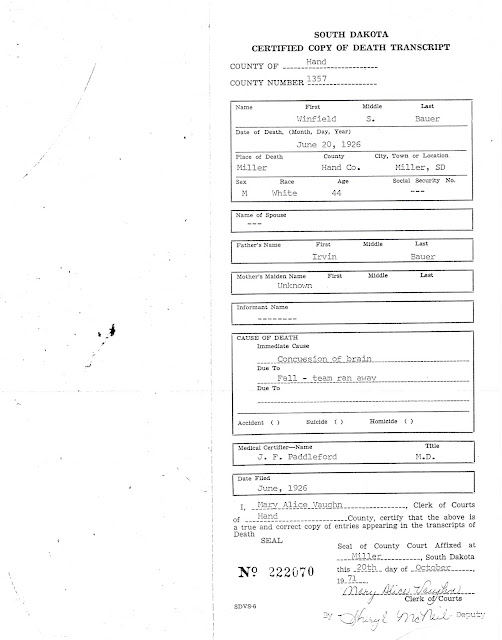 
ALL RIGHTS RESERVED. NO USE WITHOUT PERMISSION
Posted by Unknown at 6:48:00 AM