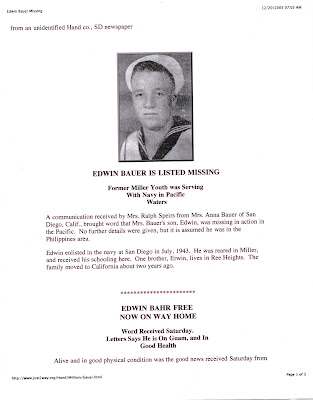 The second torpedo malfunctioned and circled back and struck the USS Tang.

Yeoman Third Class Edwin Bauer 0878392 was one of those buried at sea with the USS Tang on October 24, 1944.
Edwin Bauer was my uncle and my grandmother anna Bauer was a gold star mother.

This was an article in an unidentified Hand County, South Dakota newspaper. It was probably the Miller Press.

The USS Tang and the men who went down with her are memorialized at the Manila American Cemetary and Memorial Republic of the Philippines.

The history of the USS Tang is written about in the publications
U. S. Submarines in World War II by Larry Kimmett and Margaret Regis, Dictionary of American Naval Fighting Ships, Volume VII, Department of the Navy, and Clear the Bridge by Richard H. O'Kane.

* Note the name at the bottom of the letter above. Edwin Bahr Free and on way home.  "FREE?" Another story here.

See ya down the road,