Travel on the Danube 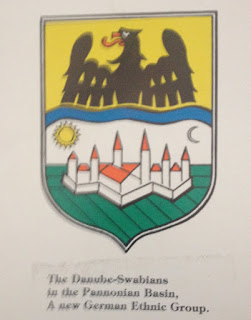 The continued study of Eastern European family history is based on the study of geography and political changes and history of Europe itself.


The Binder family of my mother and the Berger family of my father were Danube-Swabians from Germany.
http://www.dvhh.org/slavonia/esterreicher.htm
Research of birthplaces for the Bergers reflects a second great grandmother had a German birthplace and the Binder dates of birth, marriage, and death going 1) back to the early 18th century in Hungary 2) with Binder not being an Hungarian surname, and 3) the location of Binder family in Hungary being an area needing population by Germans.
postal research, Eastern European researcher, LDS microfilm

First, A Bit of History
In the 17th century the Turks were defeated outside Vienna. Their occupation and defense of this Danube basin for many years  caused devestation of land and people. Following the defeat they retreated from the area. This left a great area in the Danube basin  and the Banat needing repopulation and development.

Germans were encouraged to repopulate the area. The Hungarians enticed Germans from the Swabia area in the basin and Banat with the promise of very few restrictions on their religion, culture, and language.
See any good history, geography of the Balkans.


And thus the name Danube-Swabians was given to the many Germans of the Swabia areas of Germany (lumped together with tens of thousands from other areas). Many of these came from Ulm, Germany by boat down the Danube. The boat symbolized above.

This repopulation and migration occurred in three waves named for the monarch who sponsored their migration.

While visiting Hungary in 2016, I was taken to a several small town in the northern part Hungary along the Danube populated by the decendents of Danube Swabians.

In one of their parks was a statue dedicated to the German Swabians who travelled by boat to the areas populated during those migrations.

Although I did not understand much of the lecture of Swabians history and their population of this area, what was later translated for me went along with what I had read and with my research.

Research of birthplaces for the Bergers reflects a two great grandmother with a Ersingen, Thueringen, Germany birthplace. (translated information from baptismal record of the Roman Catholic Parish in Timisora, Romania)
The Binder dates of birth, marriage, and death go back to the early 18th century in Hungary on microfilm.
(LDS microfilm # 2065210 and 2065211)

AND THE RESEARCH GOES ON....next DNA.


See ya down the road,

If you have Danube Swabian in your family history I would love to hear from you.